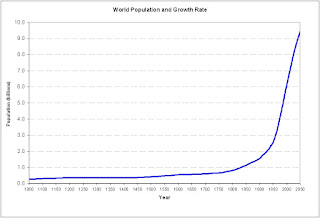 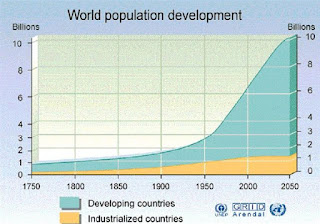 "If we don't halt population growth with justice and compassion, it will be done for us by nature, brutally and without pity- and will leave a ravaged world."


-Nobel Laureate Dr. Henry W. Kendall
"The greatest shortcoming of the human race is our inability to understand the exponential function."


When I was a child, my family made the trip from Nebraska to Texas at least twice a year to see my dad's family.  On such trips, the construction along the I35 corridor became evident somewhere in northern Kansas.  As the years progressed, so did the construction, as it moved south toward Oklahoma City and beyond.

As I grew to adulthood, I made trips to, and eventually settled in, Texas.  Since, I have made hundreds of trips up and down the I35 corridor to see MY family in Nebraska.  The road construction, once completed south of Oklahoma City, started over once again in northern Kansas.  You see, as time passed, the population grew and, the once sufficient new highway, was no longer sufficient.  So they started over.....and over, and over.

Just recently my girlfriend and I made a trip from San Antonio to Dallas.  The road construction was hideous.  San Antonio, Austin, Dallas:  the work goes on and on and on in an attempt to keep up with growing traffic pressure.  It's the same in every major city and every major highway throughout America, and I suspect, other developing countries as well.  Every time we build a bigger highway, traffic demands surpass what we've built before we can even finish.

And the answer to that seems to be making the larger highways toll roads so that only the middle class and above can take advantage of the lighter traffic.  The rest of the population is stuck in the same old traffic jam.  The bottom line is, the only people winning are road contractors and civil engineers.  We can't ever catch up.

So, "Where is he going with this?" you may be asking.  Lucky you, I'm going to tell you.  And this might be my most controversial post yet.

We live on a planet of finite resources.  What is it we're always fighting about?  Oil, natural gas.......energy!!  But that's only the beginning.  We're battling over all sorts of resources like food, water, and even things like wood and countless other products produced by our dying forests.  And while we have most certainly grown accustomed to the conveniences of the combustion engine, warm homes, and electricity, the battles over oil are nothing compared to the battles we'll see over food and water.  And trust me, the numbers that don't have those basic needs is growing.

The news has some blurb almost every day about climate change.  And unless you're completely ignorant, you simply can't ignore the fact our climate is changing.  It's warming.  The scientific data is clear. Now, obviously our planet has gone through a series of changes over the billions of years it's been around.  The "ice age" you hear people discussing was simply the most recent ice age.  There have been others and, left to it's own divices, Mother Earth cycles through those every 10,000 years or so.  The next one is coming faster.  (Go ahead and google how warming leads to an ice age.  It's too detailed a topic to discuss here).  And it's happening more quickly because of only one thing....population growth and the demand that puts on our atmosphere.

In every other species, without exception (at least I haven't found one), a growth in population beyond the scope of available resources results in catastrophic population decline.  If deer overpopulate in an area of abundance, and eat all the foliage, corn, whatever, until it's gone, the deer die off until the ecosystem can support them again.  I can't even begin to name all the examples of where that's happening, but suffice it to say, many species of animals, insects, and plants become extinct EVERY DAY!!  Are humans truly so self-centered as to believe it won't happen to us? It will.  And unless we address overpopulation scientifically and systematically, Mother Nature will do it for us.  And it will be catastrophic.  That's a promise.

Look carefully at the charts above.  They all basically say the same thing.  It took nearly 1000 years for our population to reach 1 billion.  It took only 150 ish years for that to double.  And only 50 more years to reach 4 billion.  In less than 50 years, we're approaching doubling that figure again to 8 billion.  By the year 2050, most agree our world population will exceed 11 billion people.  And then it begins to taper off.

This is the part you're going to hate.  Our advances in modern science and medicine have made it possible for humans to live longer.  In fact, it's made it possible for thousands of humans to be born or survive at all.  Infant mortality is WAY down and we've eradicated dozens of fatal diseases from human existence.  If that's your child or my child or your relative or mine, that is absolutely a great thing.  Of course we want our children and loved ones healthy and free of deadly diseases.  That's a wonderful thing on a micro scale.  But what does that look like for the survival of the species?

In essence, we've largely eliminated natural selection, or "survival of the fittest."  The weak no longer die as they did less than 200 years ago, and as they continue to do in animal populations.   At least that's the case in developed nations.  So we continue to grow a population of healthier humans which in turn, produce healthier humans, and so on and so on.  There's an entire field of study regarding Transhumanism, which is, no doubt, fascinating.  And wouldn't it be amazing to evolve to a species of super humans, free of disease.  Theoretically, it could happen one day.  That is, if we survive as a species long enough for that to happen.

Look, there are hundreds of conservation and resource concerns today.  You can drill more oil wells, tap more natural gas pockets, dam more rivers, harness the energy of the sun, and even the wind.  But sooner or later, the demands of the population exceed the ability to support it, and catastrophic de-population begins.  In my lifetime?  Nah.  In my children's lifetime?  Not likely.  Their children?  Who knows.  But it's coming.  And it's coming at an exponential rate.

We can launch debate after debate of how we protect the human species.  But if you want to solve the world's energy and resource problems, you have to address the population.  In the long run, there simply is no other way.  It's ugly.  It's unpopular.....

But it's the only real answer.